Day 2 was a day of wins evading my grasp…

Started off well against the same Anne tank Ventress team that FraVit faced above. Went with my 4-1 Dark team and got 6 tiles to kill her without her reviving. The others were easy pickings for my VF team.

2nd match was against a strange defense. Set as tank but flanked by c2Viv and Sekhmet. Again another easy win after getting 6 Dark tiles in the first 2 moves.

Was getting very confident now. 3rd match was against another Set tank with c2Khagan and Waterpipe flanks, and Kai and Penolite wings. Got my 6 tiles and killed off the right side of the defense. It was down to 4 of my heroes vs c2Khagan and Kai. Got Onyx and Cristobal charged, and they do enough damage to take out one of the 2. Underestimated c2Khagan and chose Kai. He dodged Cristobal twice and c2Khagan flattened my team.

Was deflated after that and some careless playing + not optimal boards led to 2 more losses against cJabberwock and Hulda tanks. None were zero, so at least some consolation.

Defense was actually A (2-1) yesterday and still respectable at C (4-5). Since I use tournaments to fill my raid chest, will buy back if I get knocked out tomorrow.

I got off to a really bad start yesterday with some really bad board luck when i lost the very first one and thought maybe i’ll just sit this one out, i don’t like 5* bloody battle much anyway. then i also lost the second one to a MN tank with Klaern and Zulag flanks and thought maybe i should just quit the game completely because apparently i am very bad at it.

then i checked in later and my defense was an A, so i decided not to quit and haven’t lost since.

Today was a close one in each battle but one match, in particular, Glenda Tank with Zagrog + Khepri flanks, Zeline and Uraeus as wings. Khepri killed 2 of my heroes quite fast but I managed to then kill tank and flanks… Finally, It was the 2 wings at almost full health with just my Evelyn and Lady of the Lake, but no minions, no tiles but I have no idea HOW, I won with Evelyn only having 102 health left. Khepri is good in a no heal/resurrection tournament.

I lost my last one which was annoying because it was very easy, it was Inari tank but she went off 3 times, and needless to say they kept dodging my attacks but I did manage to kill her + flank Glenda, so I did score some points at least.

Offense is chugging along at 8-2, following the waddling of Waddles. He is making what is usually a painful tournament for me entertaining. I just follow his mindless attack around the board

…it will be a very short and painful week

14-1 now. Had a super annoying loss yesterday. Entirely my fault, just chose the wrong hero to kill and it quickly unravelled.

But for a brief moment this morning I was special. But in that way that the first Skier to do the run is special 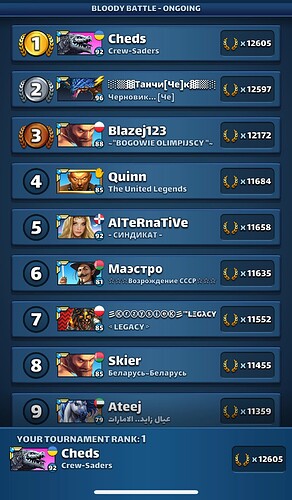 Also ran into the below defence today. It may look really nasty but in bloody battle Anne dies just as easily as the rest of them. Had a reasonable start board and that’s all my Attack team needs to get rolling. Had to take a barrage from an Anne but was never going to be a problem at the time it happened. 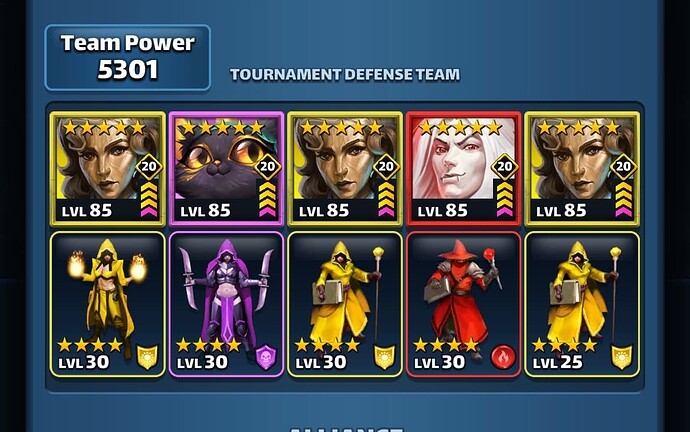 Entered Day 3 with 3 losses already and the 4th one came quickly in the first match. Facing a Bastet tank, she fired but cVictor stole her dodge and managed to kill her. Got the wing Frigg down below half HP but she evaded Cristobal’s SS and killed my team. Was always going to buy back since I use tournaments to fill the Raid chest.

Won the next 2 and then faced a Ruby tank. Got my 6 Dark tiles, but a cascade got her to 2nd charge and she just cut the mana of Khonshu, Hannah, and cVictor by 50% as well as put the mana gen down on them. They never got the chance to fire again as the flank Topaz just kept sniping everyone at 1st charge.

Defense has been holding on surprisingly well at B (7-6) for a 5* tournament. With a tough tournament like this, every point is important for the final ranking.

Damn it, I hate Bera tanks. I lost to another Bera tank.

I had a couple of very close calls, especially with an Arfania tank, he is very powerful and killed 3 of my heroes, I thought that was going to be a sure loss but I somehow won with 1 hero remaining and 500 health wow.

Decent day on offense, imteresting variety of defenses, pretty sure i switched my team up for every battle. the loss was to an Azlar tank, i took him out with tiles the turn after he fired, but i didn’t get any more tiles to cleanse until the it was too late. i maybe could have recovered if i got Krampus’ taunt up in time, but Kingston took him out the turn the tiles showed up. oh well.

D broke even and is now a B. I have a feeling c2 Magni is much better on offense than defense because of targeting. currently in 5% with 10990 points, rank 11818.

Results so far, 13 - 2 and A score on defense. To my suprise I was lucky enough till today to get decent boards against monster teams of 5200tp and higher filled with the newest heroes. I’ve ran across Anne so many times and she was the reason I lost twice. Absolute beast.

I bought back in.
I went 2-1 and was knocked out, so I bought in, and then won another (with Bastest tank) and lost the last one because of Minion makers and Fiend creators.

Very frustrating day today…really cr@ppy start boards but the strength of my offence means I can nearly get back into it. All 3 loses I was 1 or 2 turns away from the win as well.

I mean on 1 side to pull back to those was a miracle from the rubbish jumbles I had to unravel but to then get back so close and fail just really ticks me off as well.

AI was like homing missile on anyone charged ready to go as well…. 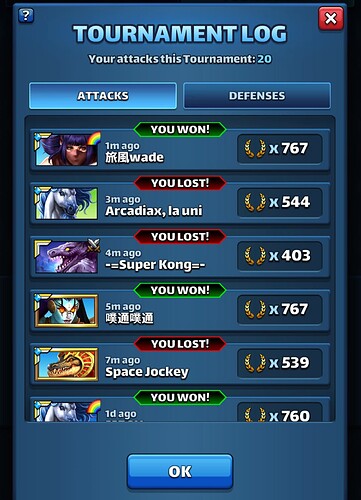 Maybe it was because my record was just 10-5 but faced only 1 team above 5200 TP today. Got good boards too, so first 4 were easy wins.

The last match was against a cPanther - El Duque - cPanther - Anne - El Naddaha team. Went with my tried and trusted Onyx - Khonshu - Hannah - cVictor - Cristobal attack team. Board was horrible and the tank fired. Fortunately a cascade sent 3 vertical tiles into Anne and killed her just as she was about to obliterate my team. Still, the opposing double Els of Duque and Naddaha both fired and killed everyone except Cristobal. Second time lucky in this match that there were a lot of Green tiles and Cristobal is deadly vs wounded opponents when there are ghosting lanes. 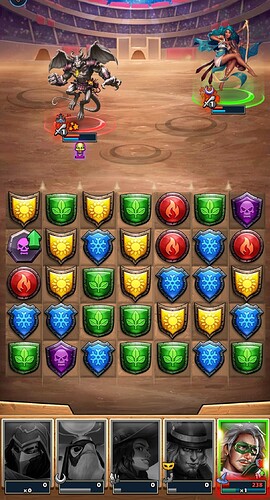 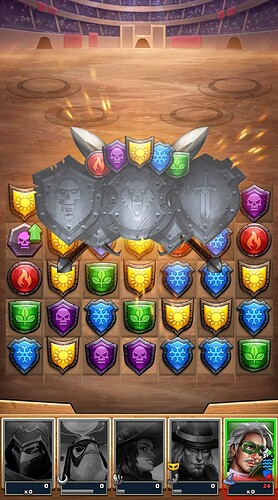 Defense has dropped to C (8-9) and hasn’t been attacked today, but over-performing my expectations even at C. Guess Bera really is tough to beat.

Good luck to those still in this!

Boards were on my side on the last day 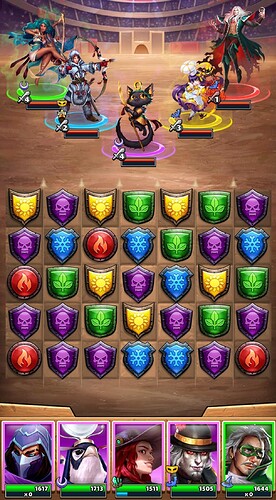 Most of the matches started like that which meant easy wins. The only loss of the day was against a Khufu tank 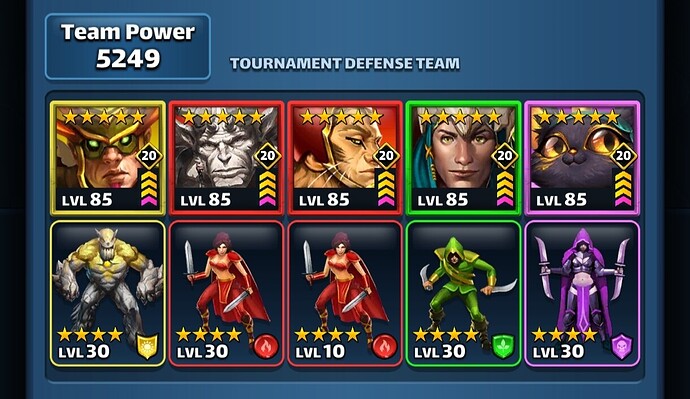 That was just a minor annoyance though as I won the last 3 to finish 19-6 for the tournament. 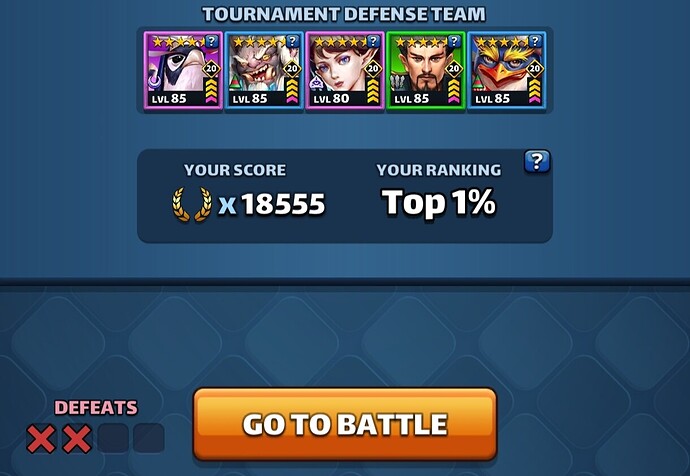 Today I managed to go 3-2 which I must admit I am happy and surprised about, I would i’d lose most.
The first one I lost was a Goseck tank, he literally obliterated me, I had no chance because I used mono and had no matches and cascades set him off. He killed 3 of my heroes, and the 2 alive had less than 200 health each. But surprise surprise, then I got the colours I needed, and did manage to get Tank + Flanks health all down to very low. But no kills, so 0 points.

The next match I lost was Arfanias tank. I managed to kill only a flank (Aouda).

After getting through Thursday, I lost the first match on Friday immediately thanks to another Furdinand tank and crappy board. Ended up at top5 which is a first for me during an 5* tournament. Mew loot except for the 50 emblems, only 1 aether??

Other than a bad 3 loss Day 2, it was a successful 5* tournament. With all these strong heroes and no healing, mistakes get punished.
The real surprise was the defense. Was the first time I used Bera since she got maxed. Hopefully she’ll do as well in today’s war.

Loot was underwhelming, but at least Matilda can use the Monk emblems. Got all Aethers except the big one again 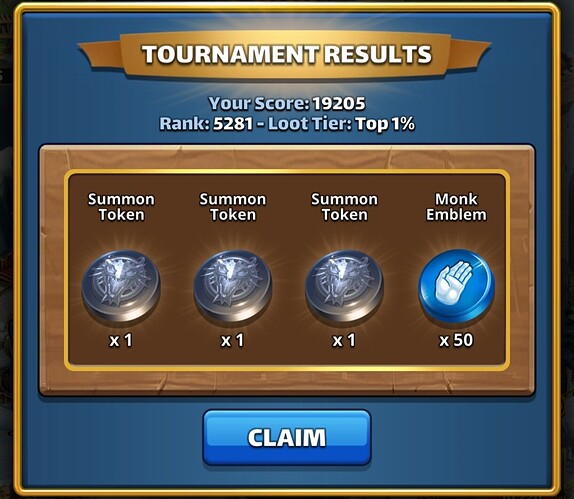 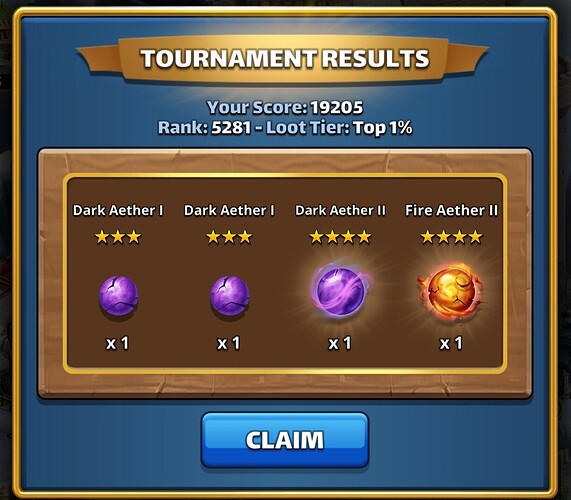 See you all next week! 3* Rush, no Blue. Lots of Trees, Sudris, and Waqases 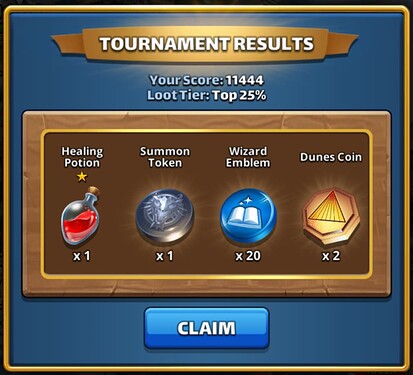 i forgot to drop by on Thursday to mention i was out on the first one due to a terrible board. didn’t mind so much because holiday. Defense ended up 9-6 and was an A except for Wednesday, and loot was pretty good for 10%:

5* aether and emblems i need.

see you next week! 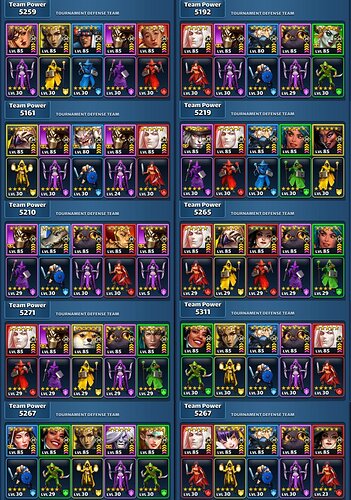