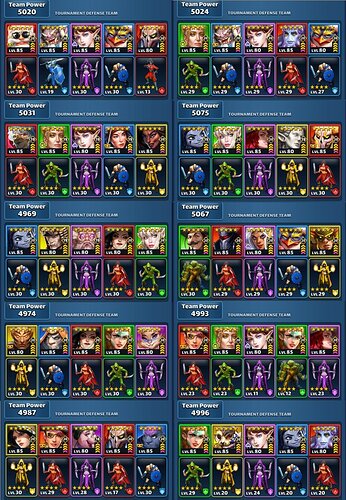 Yellow/Purple vs Miriam: who would dominate this tournament? 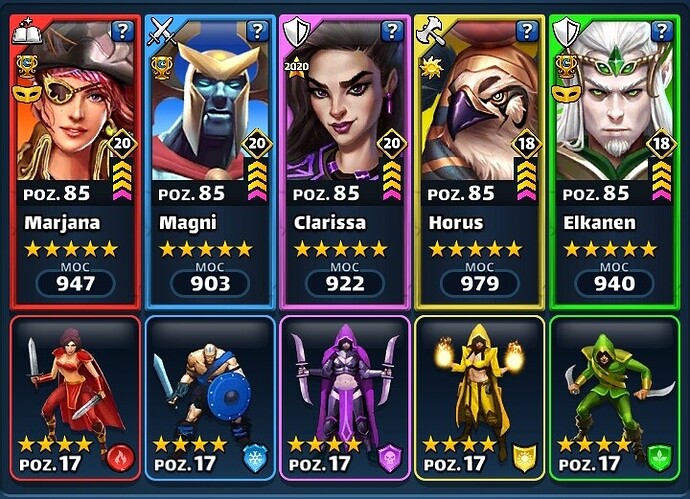 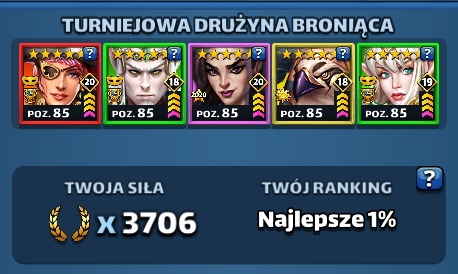 Yeah poison and DOT of any comes in handy for this tourney and Clarissa is very fast and under-rated.

Anyway, I remember Elizabeth doing really well as a tank for this tourney last time round. Those fiends and mana steal take their toll. 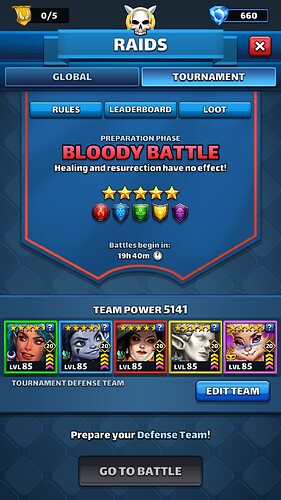 What are your opinions ? Unfortunately, there are only 17 troops left. 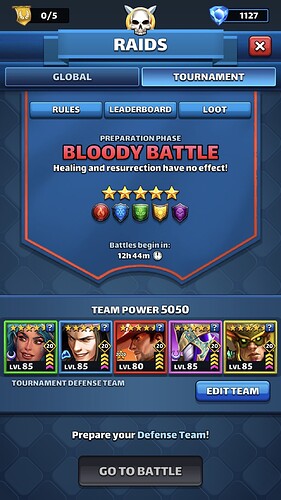 Please write in english on this area, and there is some problem with the image upload.

Update:
Thx for the edit

Here is my defense team.

Can’t wait to fight Rhys + double or triple Costume Panthers in one team. I’ll pretend there’s no tournament this week.

Rhys is fine but cSif is better.

…it will be a very short and painful week

Came across this as a match 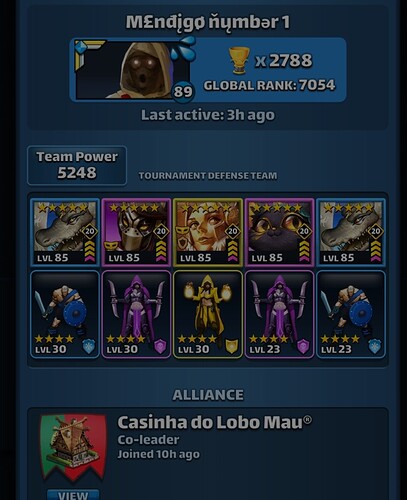 Off to an auspicious start, unbelievably.

I know I’m not getting maximum points for attacks (I am using 4* in my defense team and all but one 4* on my attack team). But I went for synergy instead of all 5* heroes in this tournament.

I actually used a rainbow defense and am using a rainbow attack team as well…I’m breaking my tendencies there. Still amazes me that I could beat all those teams today and pull out a quick defensive win. Best tournament start (for 5* tournament) that I’ve ever had. And…hopefully I’m not jinxing myself by posting this.

Day 1 and all greens…a pleasant surprise for me.

I am using a very tried and tested team that, unwittingly, is very suited to bloody battle. 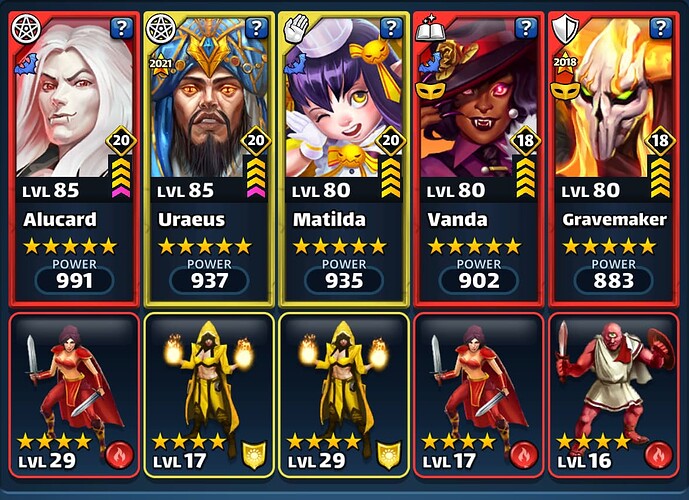 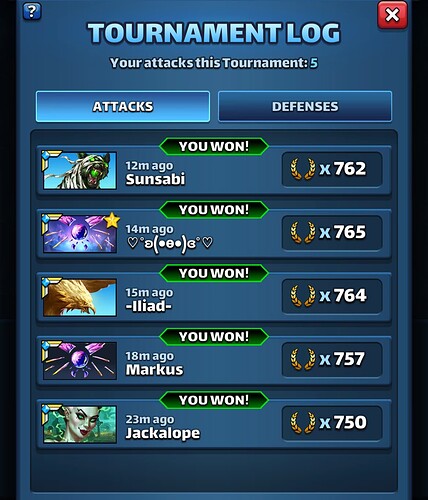 Defence doing a job as well. I thought it do and Matilda must be a right PITA in this mode 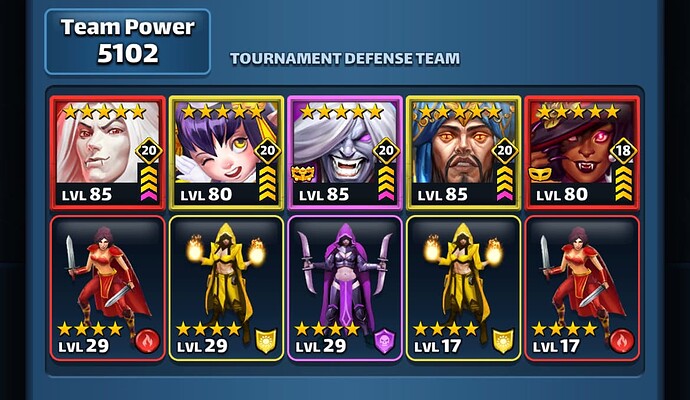 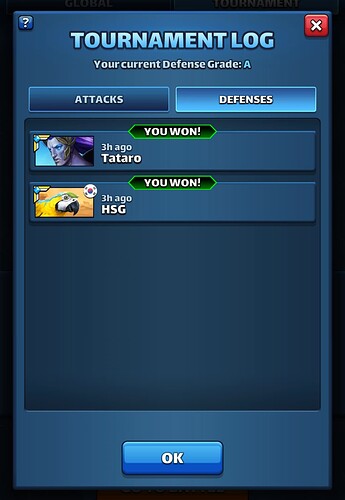 Since I don’t employ healers in regular raids, the same team of Onyx - Khonshu - Hannah - cVictor - Cristobal works for Bloody Battle too.

Boards were good and I faced mainly average and slow tanks (Ludwig, Krampus, Sif, Set) so the only trouble was in the last match against a Sekhmet tank with Kai flank 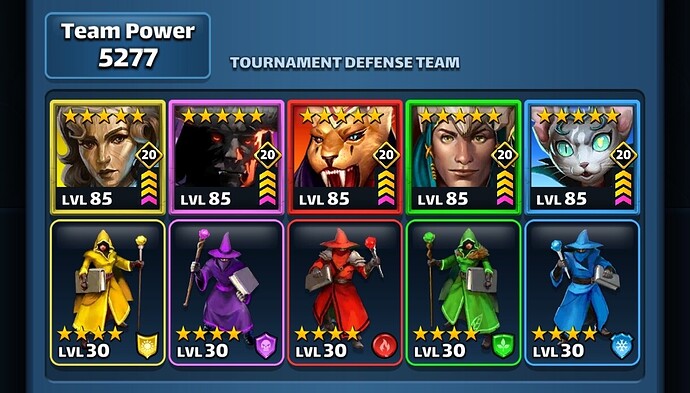 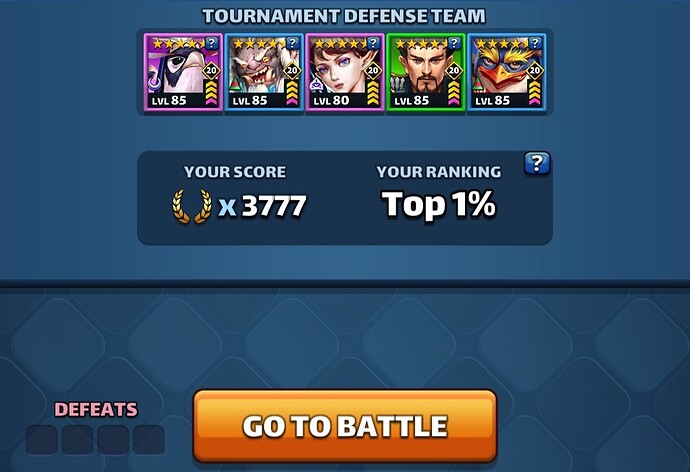 I don’t know why but I think most people underestimate Mielikki tank in 5* tournament. 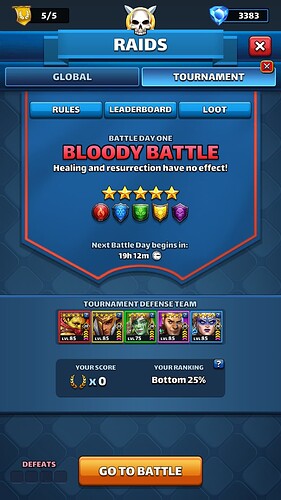 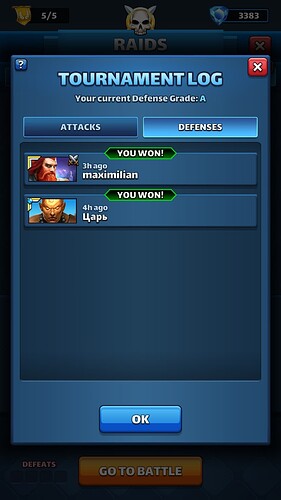 I didn’t have amazing boards but not terrible either, so it was all fine, I did almost lose another one when it did dry up but luckily I took mono green in all my raids and I used Telluria + LotL (I know, and did then, there is no heal). I used them for minions and LotL minions definitely helped a lot in a few of the matches.

The only one I lost, and sadly I didn’t get to have many minions, was against a Bera Tank with Khufu flank. Khufu I killed first, but Bera activated twice and I couldn’t get minions, and then I was destroyed - although I did manage to kill 4 in this match which I was very surprised, so I did at leas get some decent points.

I lost the 1st attack.
As expected, I would say.